< Back To Main Blog Page

My pet swallowed a __________. Fill in the blank with almost any word. Pets swallow socks, underwear, golf balls, sewing needles, softball gloves… The list goes on and on! Sometimes items will move through a pet’s digestive tract, and other items will require surgical removal. Max’s situation required surgery.

Max is a 2-year-old domestic longhair cat. Here is a timeline of Max’s situation:

Sunday: Max ate approximately 1/3 of a pair of his owner’s underwear.

Monday: Max had a bowel movement that contained a small part of the underwear. Max still had a normal appetite, but he did vomit Monday night after eating dinner.

Tuesday: Max had no stool or urine; Max stopped eating and drinking.

Wednesday: Max started vomiting bile and was very lethargic. He was still not eating or drinking. Max’s owner brought him into Countrycare Animal Complex for evaluation.

We were lucky because we knew that Max was ill because he had eaten something he shouldn’t have, and we knew what it was that he had eaten. Often times, a pet will begin acting sick and the owner won’t know why.

We ran a complete blood count (CBC) and chemistry panel to test Max for infection and for liver or kidney abnormalities. We wanted to make sure Max’s organs were healthy enough for the anesthesia if he required surgery. Max’s blood work all came back within a normal range, so we were able to rule out infection and liver/kidney defects. 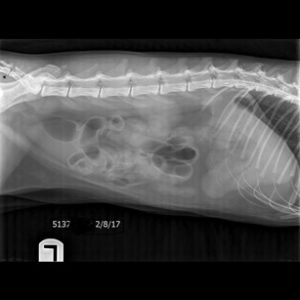 We knew Max ate some underwear, but we needed to know if the material was still in his digestive system. He could have vomited or passed the fabric without his owner knowing. For that reason, we took X-rays to see if we could see the foreign body still in Max’s system.

Unfortunately, we were unable to see anything obvious in the radiographs. We couldn’t see exactly where the material was in the GI tract. Because radiographs are the least expensive and least invasive option, we were hoping they would be conclusive. That was not the case for Max, and we had to continue with the next level of diagnostics.

To determine whether or not Max needed surgery, we performed a barium series of his gastrointestinal tract. We syringed a mixture of water and barium liquid into Max’s mouth. Over the course of 5 hours, we took an x-ray every 30 minutes. The barium shows up bright white on the X-rays, and that is helpful for three reasons. 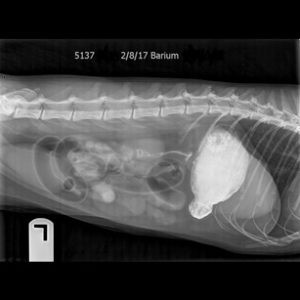 Patients that have partial or complete blockages require surgery. We could tell from Max’s results that he needed surgery to remove the blockage from his system.

We moved Max into the sterile surgical suite and prepared him for surgery. Once he was safely under anesthesia, Dr. Richard Barr began the foreign body removal. He felt (palpated) the stomach and intestines to locate the blockage.

After removing the obvious obstruction, Dr. Barr meticulously checked the stomach, the small intestines, and the large intestines for any remaining fragments of cloth. Once he was satisfied that he had taken out all of the material, Dr. Barr carefully closed Max’s abdomen with sutures. 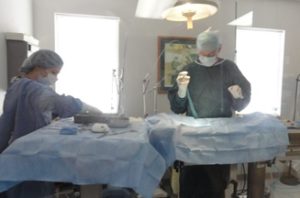 Once the surgery was complete, we monitored Max carefully as he came out of anesthesia. We kept him hospitalized for two days to make sure he was able to eat and drink and pass urine and stool.

Max made a full recovery thanks to his owner’s realization that something was wrong.  If she hadn’t brought Max in for an evaluation, the outcome might have been different.

Watch For These Symptoms

If your pet stops eating, becomes lethargic, or has bouts of vomiting or diarrhea, contact your veterinarian. Your pet may have eaten something he shouldn’t have. Don’t try to induce vomiting unless directed, as some objects may cause more harm on their way back out of the body. Don’t wait for the object to pass on its own. In Max’s case, the object never would have passed.

Every case is different. Not all situations require surgery. Your veterinarian can determine the best course of action for your pet. When the situation can be a matter of life and death, it is better to be safe than sorry!

Information for this article was compiled by Dr. Barr’s veterinary technician, Alex.  She has assisted the Countrycare doctors with exams, surgeries, and dental procedures for over two years. Alex has two cats, Oliver and Pumba, and a ferret named Meesha.